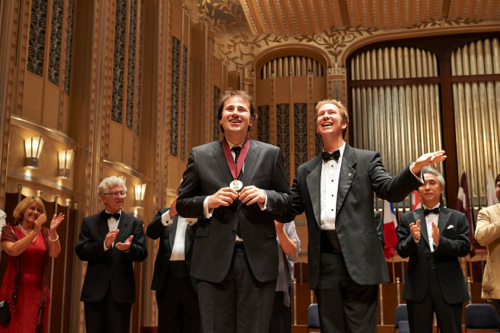 An alumnus of the School of Music, Pierre van der Westhuizen, was appointed in January 2012 as the executive director of one of the most prominent classical music competitions, the Cleveland International Piano Competition. At this year’s competition in August, he had already added his own touch to the proceedings with several innovations and expansions. The Huffington Post recently rated this competition as the best of the American summer season (which also includes the famous Van Cliburn Piano Competition). The expansions which Pierre instituted includes a festival of lectures, discussions, films and master classes which were presented parallel to the competition. He also embraced social media and arranged for British artist Luke Jerram’s installation of more than 20 decorated pianos, entitled Play Me, I’m Yours, in Cleveland for the duration of the competition. Future developments include a chamber music round, new compositions composed especially for the competition, and a CD-recording by the winner to be released on the Steinway & Sons label. The Young Artists Program will also be expanded to international level. These initiatives have already been labelled the “Van der Westhuizen Effect”. The next competition will be offered in 2016.

Pierre and his wife, Sophié, both studied at the former PU for CHE and departed for the USA in 2001 for postgraduate study at Youngstown State University. After completing their doctoral studies at the College-Conservatory of Music in Cincinnati, both accepted positions at Heidelberg University in Tiffin, Ohio in 2005. They still perform regularly as the Westhuizen Duo and again presented the Dean’s Concert in September this year at the Conservatory in Potchefstroom.